I like a lot of easy sides. These easy twice baked potatoes are one of them. Aside from the simple ingredients and low maintenance assembly, my boys love them. Yes, both Jack and Cooper actually have a couple foods they can agree on.

This is gonna be quick, so keep up. The potatoes get washed really well and poked with a sharp knife a bunch times so they don’t explode in the oven. I have exploded more than one potato in my life and its a pain to clean up. Not recommended.

We are going to bake the potatoes until they’re fork tender. That means a fork easily penetrates the peel and the potato flesh inside is soft. After they have baked the first time and as soon as you can handle them, cut off the top, and scoop out the potato into a big bowl.

Now we are ready to add our mix-ins. Leave just enough potato flesh inside the peel so that the shell holds it’s shape. Minor detail. I like to mix in all of the regular baked potato toppings. Bacon. Cheese. Sour cream. Maybe chives depending on how fancy I’m feeling. Some seasoning from salt, pepper, and a little onion powder brings it all together.

After they are sufficiently seasoned and loaded with more cheese on top, back into the oven they go. The melty cheese and perfectly crisp bacon jammed in that potato is simple perfection.

Make it step by step with my video and follow along. 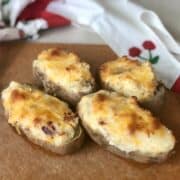 Cheesy and loaded with bacon, these potatoes are the perfect scratch made side dish and are so simple to make.
Prep Time20 mins
Cook Time1 hr 20 mins
Course: Side Dish
Cuisine: American
Servings: 4
Calories: 410kcal

Perfect side for entertaining...

What am I forgetting???

I have a lot of ideas for this but haven’t tested them out, but I’ll be back with more easy twice baked potatoes recipes later.

Questions you may have:

If you made this recipe, please leave a rating or send a comment. I always like to know how it goes for my people!

Hi, I'm Alexis! I love cooking from scratch and updating classic recipes to make them my own.