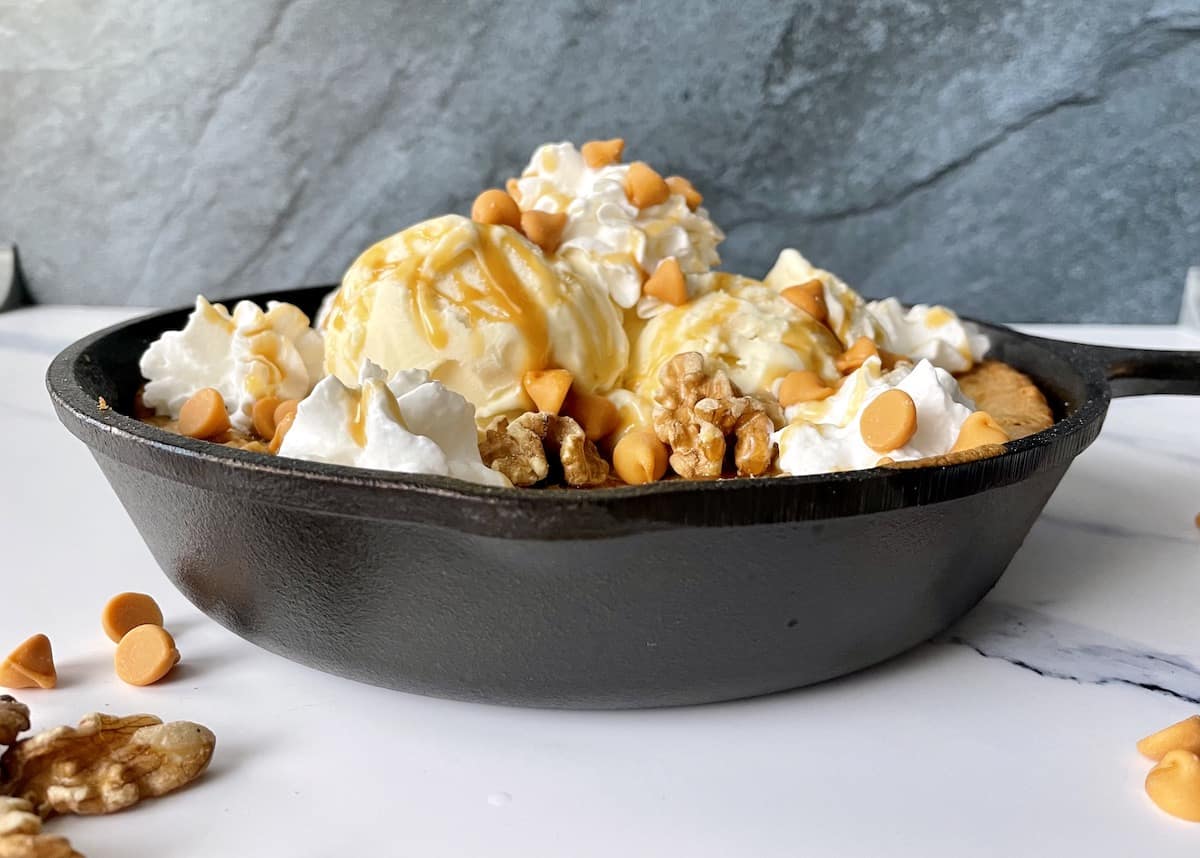 After a great Traeger dinner, we need a great Traeger dessert. These butterscotch blondies are baked in a cast iron skillet right on the Traeger. I top the whole thing with heaping scoops of rich vanilla ice cream, caramel sauce, whipped cream, and extra butterscotch chips for the ultimate sweet tooth satisfier.

This blog post contains affiliate links. As an Amazon Associate I may earn income from qualifying purchases.

Similar to a brownie, a blondie is a rich and dense baked dessert. To achieve the gooey and moist texture that separates blondie batter from cake batter, we are using less flour and have a higher ratio of eggs and butter.

So, to bake these blondies, you will need:

I love to serve the blondie as a fully loaded sundae with good vanilla ice cream, whipped cream, caramel sauce, extra butterscotch chips and chopped walnuts. This dessert is not for the faint of heart.

Next up, let's talk supplies. With any kind of baking, we will either need a stand mixer or large bowl with a hand held mixer. I always opt for my stand mixer.

We are baking these blondies in a 9" cast iron skillet. Serving food out of cast iron is charming and special. Goes with my down-home vibe. This skillet bakes to perfection in a Traeger grill and it makes for easy clean up. If you prefer to bake this in the oven, read the modifications below.

Print Recipe
No ratings yet

A rich and decadent blondie loaded with butterscotch chips and walnuts. This heavenly dessert is baked in a cast iron skillet and can be baked on a pellet smoker or oven. Serve it warm out of the skillet with vanilla ice cream and caramel sauce.
Prep Time10 mins
Cook Time1 hr
Cooling time15 mins
Course: Dessert
Cuisine: American
Keyword: blondie, cast iron skillet, traeger grill
Servings: 8

-When I make these for us at home, I actually use gluten free flour. However, there is such a little amount of flour, the difference in texture is undetectable.

- You can sub out the butterscotch chips and walnuts for other fun mix-ins including: m&ms, milk or white chocolate chips, peanut butter chips, dried cranberries, slivered almonds, or pecan pieces.

-To bake these in a conventional oven instead of a Traeger adjust the temperature to 350F and bake for 45 minutes.